Today at a noon-time press conference, city of Lackawanna Mayor Annette Iafallo and Douglas Jemal, President and Founder of Douglas Development, jointly announced that Douglas has been named as Lackawanna’s designated developer for a $35 million mixed-use project planned for 539 Ridge Road in the city’s Second Ward, which will feature 160 market rate apartments averaging 850 sq. feet, 10,000 sq. ft. of ground floor retail space and 30,000 sq. ft of underground parking.
Lackawanna issued a Request for Proposal (RFP) for the 539 Ridge Road site on January, 21, 2022 with a proposal submission deadline of March 15th of this year. Douglas was chosen for the project based on the quality of their RFP response.
The Lackawanna City Council approved the land sale and transfer to Douglas for $1 by a 5-0 vote at their Tuesday, September 20, 2022 business meeting. The $1 land sale price was recommended by Mayor Iafallo given Douglas’s stated intent to develop the 539 Ridge Road project without tax abatement incentives and pay full city taxes upon project completion.
‘We’re honored to partner with the elite development team at Douglas Development as we continue to move forward with my administration’s efforts to revitalize Lackawanna from both an economic and community development perspective,” said Mayor Annette Iafallo. “Doug Jemal and his team have been making a transformational impact in the city of Buffalo over many years through successful completion of several multi-million projects. Given our proximity and similarity to Buffalo, my team has worked hard to bring the Douglas team to Lackawanna and today, I’m proud to say we’ve succeeded. This is another great milestone in restoring Lackawanna to prominence”
The 1.25-acre 539 Ridge Road parcel in Lackawanna’s Second Ward was the location of the former St. Barbara’s R.C. Church, which stood from 1930 until it was closed/consolidated by the Diocese of Buffalo in 2008 and subsequently demolished in 2011. The diocese then sold the land to the City of Lackawanna in November of 2014, and it has sat vacant ever since
“My team and I couldn’t be more excited to work alongside with the wonderful city of Lackawanna. We think that Douglas Development can help play a role in catapulting Lackawanna back to what it once was,” said Douglas Jemal, President and Founder of Douglas Development. “With such rich history, simply minutes from downtown Buffalo, and a tangible eagerness within the community to get the ball moving, we felt like this was a perfect location for our next dynamic project.”
The proposed $35 million mixed-use project by Douglas Development will mark the first of its kind in Lackawanna’s in over a generation and serve as the anchor for the Iafallo administration’s multi-million revitalization plan for the Ridge Road – Center Street corridor, which will include:
– A complete curb-to-curb reconstruction of Center Street in partnership with the Erie County Water and Sewer Authorities – which will be going for bids in the coming days,
– Construction of a grant-funded splash park/inclusive recreation park at nearby Franklin Playground, which is expected to open next summer,
– And construction of three affordable single family residential homes by Habitat for Humanity Buffalo in partnership with the Lackawanna Housing Development Corporation with funding from the city’s community development block grant dollars administered through Erie County.
Lackawanna’s project partnership with Douglas Development continues the city’s success at attracting new development projects since Mayor Iafallo took office in 2020 and unified/lowered the city of Lackawanna’s tax rate as part of an overall strategy for rebuilding the city’s economy, which had eroded since the former Bethlehem Steel Corporation closed its local steelmaking operation in the early 1980’s.
Since 2020, over $100 million in new tax revenue generating development has been initiated or completed in Lackawanna, including:
– Advanced manufacturing /warehouse projects by TMP Technologies/Magic Eraser, Sucro Sourcing, LLC, Uniland Development and Ciminelli Development within and adjacent to the new Renaissance Commerce Park emerging within the former steel plant site which is led by Erie County government in partnership with the City of Lackawanna,
– And manufacturing / warehouse projects for Flexlume Sign Company and Premium Coffee/Queen City Foods on city-owned parcels just east of the commerce park off NYS Route 5.
The next step in the process is for Douglas Development to present their project plans for 539 Ridge Road to the Lackawanna Zoning and Planning Boards before year end 2022. The project is expected to take up to 24 months to complete.
Site renderings are posted below. The press event can be viewed on YouTube https://youtu.be/9r52TbefaOw 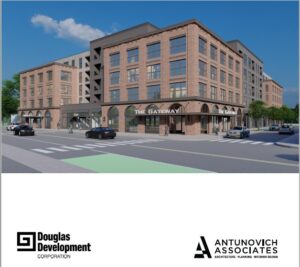